Looks like this blog is completely transforming into something dedicated to the homeless!
Anyway, this time what I'm going to write about is regarding street performers of Europe.

I was lucky enough to be in Italy for quite some time with occasional visits to neighboring European countries. Great it was, with a number of unforgettable events and memories. And one of the many interesting things that I could see there was the quality of work by the people who perform at the streets! amazing!

They are not beggars. They are performers!. But the only difference is that these guys are performing on the streets and it's not 'mandatory' for you to pay if you want to watch it.

And of course they are not like those people whom we find in our bus and rail stations here, who irritate you and make you pay so that they'll go away. (of course, not everyone. I love those singers and appreciate their work. and I do have a small collection of these street songs that I could record on the go)

The Violin family of Zara
Can't ever forget them! Especially because of the fact that he remembered me!

We had gone to the ESSELUNGA superstore at Zara for our weekly grocery purchase. And in front of the store there was this small family; a violinist, his wife, their dog and a cinque cento (fiat 500). I'm not so sure whether the car belonged to them. 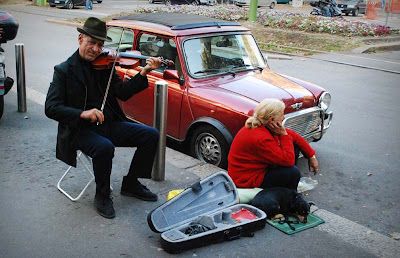 He was playing interesting music in his violin! So interesting that I could not click a pic but had to stand still listening to the music, watching him play completely enjoying what he's doing. He played always in tune with the surroundings. Changing his song to a nursery rhyme when two kids came out of the store with their mother. The were happy to hear THEIR music! they were jumping with joy and he smiled. That's the kind of connection he made with his audience. He was dedicated to what he was doing. Not WORKING to earn money. but to ENTERTAIN people. He even changed to a dance number when a drunkard stopped by to listen to his music. That guy in his high, started dancing! He played along. A combined performance.

Somehow, before leaving I managed to click one photo, and that's what's I have posted above.

But the best part happened later when I was traveling in the tram after shopping. Even this family was there inside. With a yellow pack from Esselunga-- they too did their grocery shopping. (oh ya, so now I'm sure.. that cinque cento was not theirs)

I looked at him and he said "ciao!" ("hi there" in Italian) he recognized one of his attentive audience!

The Orchestra of Duomo Station
I met this bunch of young musicians many a times. Especially on Sunday evenings when they stand in a line to play great music, which I would like to call an orchestra. 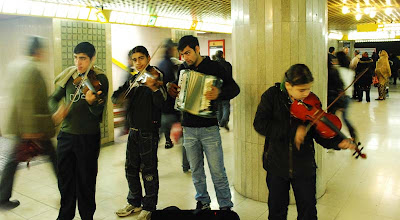 Of course, don't even think about them calling beggars! they're not. They're kids who perform on the streets. They do what they like and if you like it, join them. Why I was saying this quite strongly because I was really touched by what happened that day.

They were playing, amazingly well and I had already put whatever I had in my wallet into their open violin box. 'put' as in I took the effort to walk upto them and 'place' the coins inside the violin box. But when somebody 'threw' one coin and walked away without even listening to what they were playing, it was painful to watch the expression of that girl who was playing the violin. The coin went outside the box when he threw and it stated revolving on the floor rigorously. She stamped on it; once to stop and then with anger. again and again she stamped... with a red plump face.


The Cupid at Florence
He's talented, and of course he's gifted. Other wise, who else in this world has got a face as cute as this at this age? He did his make-up himself. making faces as he painted it. 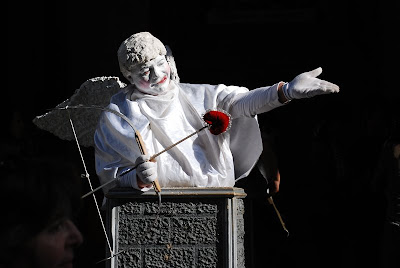 and within a few minutes, he was ready for fun. Not like any other 'statue-man' that we usually find on the western streets. this guy had it in him. his inborn talent to entertain people. No one felt pity. No one showed sympathy. everyone went to him, clicked photographs and paid for what they did. a small amount. from their heart. after all, more than money what artists need, what performers need is a token of appreciation.

The Guitarist at Florence
I'm putting up his photo first. 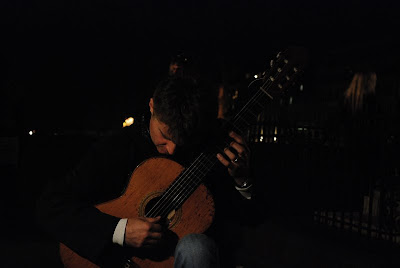 He was not there, although we all could see him playing, sitting there on the small bridge in Florence enjoying his guitar. He was in his own world, the magical world of music. I'm not blabbering, because even I was drifted from that crowded street of Firenze to some other world of my own. When memories flashed in as he played one of my favorite Italian songs (" Con te partiro" from "Romanza" by Andrea Bocelli) He was into his own world, and I was into mine.

The street Magician at Amsterdam
Magic, one of the great (dieing) arts!. Usually performed along with magnanimous sets and glittering costumes to support or distract-from whatever they're doing. But this is no stage show!. this is street magic! Pure street magic. where you're vulnerable. vulnerable to losing your trick or losing the entire show. It's not like that Street magic we see on TV. There, the great David Blane (I'm a great fan on him though) has a privilege to edit out his unsuccessful shows. Where he has the liberty to show only the best of his work. This guy here has only one chance. One chance to perform. One chance to earn his living for the day. 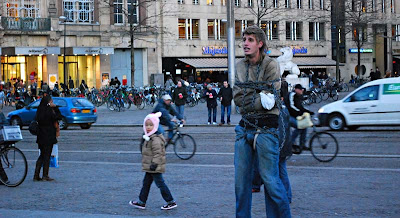 I remember him asking people in his highest voice, to put some money into his inverted cap, before he did his final act. But he also reminded, it's not just the money, what he needed was our applause. as I told you before, a token of appreciation.

The Street Comedian at Florence
True entertainer, with about a hundred people watching him perform with a smile on their faces and laughing out loud quite often. He walked around the street corner, grabbing his audience (literally) and placing them in the gallery.

He enjoyed what he was doing. Snatching a phone somebody and talking to his mommy, or switching hats of people from a tour group, or stealing someone's girlfriend's hands. But no one complained, no one made a red-face. Everyone LIKED what he was doing. and showed their appreciation with the coins that they put into his hat.

The Afro Singer at Paris
He was not just performing. He was selling his album there. 10 Euros a CD. if you want it, put a €10 bill into his open hat, and take one CD. or if you just want to help him, put whatever you like -but don't take the CD. He was singing amazingly great. I don't know whether it was his original composition or he was just playing some one else's song. see it for yourself and let me know. This is a video

The Music-man at Duomo
Yes, I really meant it. He was the MUSIC-MAN! Or I'd like to call him too a Street Magician, creating magic with music. You will never get what I really mean unless you had been there at that place and listened to what he was playing. Music which is enchanting! He was playing a number of instruments at the same time, most of them I haven't even seen before. He had a 'chime' that created a feeling as if you were flying through some green valley (really, but I don't know how) . Pan flutes, tambourines, a tambourine like instrument filled with mustard seeds --which created the sound of wind when he tilted it graciously, a bird like instrument --which chirped exactly like a bird when he filled it with water and blew threw it. Yes, the feel of the green valley I was talking about. complete with blowing wind and bird chirps. 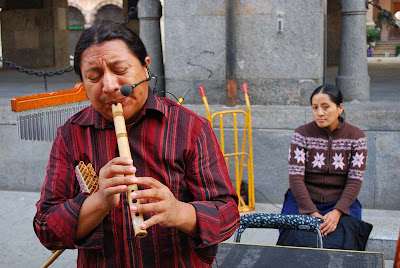 Again, what captures the most is the human touch of it. the feeling that you get when you see him and his family in the context. She was sitting there behind him and I could see her love for him in her eyes (I'm serious). It was not just the music that we could see there, but his life too. Something unforgettable. and of course, the expression of the people!. Of people who enjoyed his music, people who stopped by, to listen to what he was playing. Enjoying every bit of it. 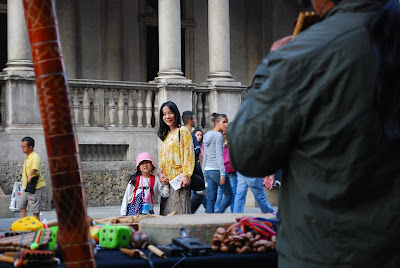 The Australian music in Rome
If you're an Indian reading this blog, you will sure remember that starting bit of music from Dil Chahta Hai's "Jaane kyu log pyaar karte hai". The sound of that Australian instrument -Didgeridoo. This couple, who looked like gypsies to me was performing on the streets of Rome with a Didgeridoo and a tambourine.

Again, amazingly great performance. People stop by, Heads turn and ears get focused -involuntarily; that's the power of music. the power of performance. Even we stopped there, until one song was completed. And then we walked away...

The Sax Player of Louvre
That was a great day in Paris and we were walking down the streets next to Lourve-museum at night. And from nowhere, we started hearing this music. First we felt like it was some record playing somewhere, there must be some function going on inside. But as we approached the music became clearer and clearer, and loud too. And once we entered that arcaded hall, we could see this man completely into what he was playing. His music resonated inside the arcaded hall, amplifying and transforming it into a complete, processed music piece. 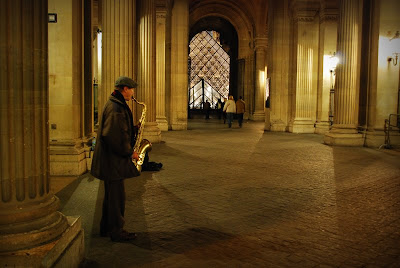 Could you find something interesting here? instead of playing in the busy streets, where he had a greater number of potential 'money-givers', he chose to play here, in this lonely arcade where people seldom came, where he probably got much little money than he could've earned from a busy street. But the quality of music, which resonated and lifted the mood of the place way up, he was never going to get it from the street. People would have still given him money, not because of the music, but because of sympathy. But he chose the arcade.

Before I finish:
Well, so that's the whole point. They didn't beg. they just performed and then it became OUR RESPONSIBILITY to pay them for what they did for us. Of course it wasn't mandatory. But once you enjoy what they give you, you'll feel like paying back. a little of the joy that the performer decided to give us for free. Yes, for free. he gave us entertainment, joy and peace of mind for FREE.

and now it's our turn to give them something for free...

our token of appreciation. a smile, a part of the joy that they give us for free. and of course it's always good to give them some money for free.

don't PAY them. just give some money for free... because they give us happiness.. for free.
Posted by bijuneYYan at 11:53 PM