You know why? because all the 'ingredients' for a "Typical Great Photograph" are easily available here!

In the foreground, A street kid with a 'leaking' nose carrying a 'handicapped, nude' barbie doll that he picked up from the garbage bin. In the background it's his mother washing the plates sitting right next to the public drainage; she's out of focus, along with the other blurred elements from the back ground, leaving it for us to unfold their 'story'. (thanks f5.6/18-135 Zoom on a Canon 450D)

The close up of an old man! A Powerful portrait. The look in his eyes are enigmatic. The sharp detail of oil and dust accumulated on his wrinkled face is just fabulous. His grey hair has almost turned yellow-brown; each strand is clear. (50mm normal Lens on a Nikon D80)

Well, the pictures described above, were just from my imagination, Purely hypothetical. But think, while you were reading that, how difficult it was for you to visualize such an image? Quite simple, eh? you've seen hundreds of images like these. "Typical Great Photographs", Let's call it TGP.

Well, I will never say that it's easy to click a TGP. It's extremely difficult. But the thing is, if you're a photographer who has the will power to click TGPs, Mumbai is all yours!

As I said before, Mumbai is a Photographer's Eldorado. It's gold everywhere you just need that willpower to take it from there.

But wait a minute, It's a photograph! Not a movie 'about' Mumbai. It's a photograph, Not a sketch. And what do you think is the most important difference between a photograph and a sketch (or a movie or a painting) ? It's the fact that Photographs deal with stories of real people!.

When you(and me) point a camera and click a TGP, we are telling stories from that poor little man's personal life!. Who the hell are we to do that? It's not a story about 'someone'. It's the story about that particular person in the photograph!. An individual's story! Obviously without his permission!

Since it's so easily available in Mumbai, we sometimes take it for granted that the life of the poor is for us to show to the world. NO! It's THEIR precious life. They're doing everything right in front of our eyes (and cameras) because they do not have any other place to go. It's not becaue they find bliss sharing their poverty filled private life (or their wrinkled faces with "sharp details" or "mysterious eyes") to us.

I don't know, It's a mix of feelings that I get when I look at TGPs. More than the sympathy that I feel towards the subjects in the photograph, it's the resentment towards the photographer that's more overpowering. I really don't have any specific reasons for this negative feeling towards TGP photographers, it just comes! It's more of an emotion, it comes from within; not from the logical thoughts.

I chose NOT to give you any direct examples here.Instead,
I'd like to share two things with you right now.

1) The touching story of my friend Vaibhav, where he permanently deleted the photographs that he had clicked.

"I thought I would write a comment to this post, but now that I've started writing, I don't really find the right words. I chose to remain silent. I am silent, coz I happened to pass by another such group of women who had actually been picking those chicken feet, in old parts of Lucknow, where I had gone on a hobby photography trip. I feel more sad about me, than about them. The reason, I chose to capture their plight on my camera, instead of doing something else. I chose to take images of their shy faces, which they were trying to hide, for they had a complex about their inferiority. I did not react at all. I kept on clicking images with a heart of stone. It was when I returned home and I actually saw those images, that I felt like crying, again, not for them, but for myself. How cruel I was that day. I can't forget the expressions on the faces of the ladies. They were expecting me to leave them alone. But I was a selfish man. i was looking for a winning pic for the forthcoming photography contest. I sure would have won the contest, had I not deleted the images forever from my PC."

2) An Animation by my friend Hashim. One among the best I've ever seen.
Watch it with all your heart (and not your animator-brain)


(posted with Hashim's Permission. Please don't download or use it somewhere else without his permission. Thank you)

...
If you have watched Hash's animation above, you'll know what I'm feeling right now... 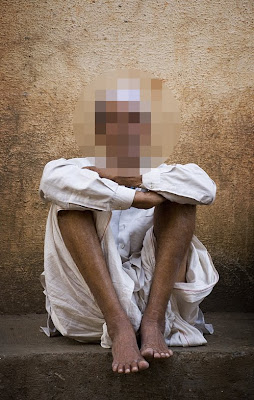