Does the absence of something can be considered as a definitive input?
What pushed me to write this post is nothing but the great information display boards in Mumbai train stations. Here's a sample: 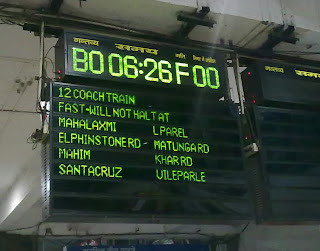 In first look, what do we feel? That the train WILL stop at these stations or WILL NOT?
What if we just missed the first line? or what if we just didn't see the name of the station that we had been looking for?
I would like to ask that question again; "Does the absence of information can be considered as a definitive input?"
In simpler terms, if you DONT see one station name on the board, does that mean that the train WILL stop there?
Technically yes, but it's a WRONG* way of displaying information since you are forced to take decisions by the absence of information. In this case, if YOU dont see a station name, you are FORCED to make a conclusion that the train will stop at that station, despite the fact that may be you just missed the name which was already there.

Here's another example to make this clear. What does an "electric tester" do?
If we say that we can test whether "electricity is present or not"; we'll get terribly wrong. Because it can only inform us about the PRESENCE of electricity and NOT the absence.

Coming back to our Railway board; I believe it should be the other way round where they display the stations in which the train STOPS. And once you SEE the name, you're sure that it WILL stop there.

After all seeing is believing :)

*one friend of mine had a heated discussion with me arguing that the people who come to mumbai (not the ones who are already living here) are more worried about the stations at which it doesnt stop. And this is the best solution for Mumbai stations!

But let me tell you. Irrespective of the city, the question remains the same; "whether you should take decisions by the absence of information?"... Period.

Posted by bijuneYYan at 5:36 AM